Many stories and articles have cracked a window into that blur of time. For me, I remember fondly the times when the cameras weren’t on, the stream wasn’t live and it was just the tribe of occupiers from far away cities pounding the pavement of downtown together. There are other moments, like the police van heard round the world, that do deserve a place in type as honestly as any of us dare to remember it.

The bus ride to Chicago barely contained our energy as we rode into this new arena. Unfamiliar streets provided an adrenaline-charged challenge to us out of towners, but it was a sentiment everyone felt, including the local occupiers, who had been dealt many blows by the historically, notoriously corrupt CPD. We found comfort in all the good company: allies from LA, Boston, Philly, Tampa…this was the first real national gathering. We were all answering the call to rally, but also to put occupy on record again. We peacefully ate and slept together under the stars, knowing quite a few of us would see the dark walls of a jail cell soon. This is what, I thought, the youth of resistance looks like; a semi-sweet paradigm, finding solidarity and love while barely afloat the wreckage.

Among the scattered swarms of state police I could hear often as much laughter as the displays of rage. Joking and yelling took turns at the bicycle cops, riot cops, the cavalry and of course, the LRAD, but it was always carefully balanced with the very real and warranted fear. That was a feeling no black bandanna could hide. As wounded warriors we knew the army we faced, protecting the fascist corporate regime behind the castle walls. We all knew our fight wouldn’t get past the gate and beyond, to the men and women in suits who decided our world’s fate. These were the epic scenes freedom fighters craved, the action at the front line where the fed up slaves confronted their corporate masters. Although sometimes, we got more than we asked for.

The now notorious Chicago police van drove straight through the front of one of our night marches. Full of people. And accelerated in the process. Considering the potential, we were all very lucky. Especially Mandolin and Jak. I prefer not to mention too many names, but I feel it is important to acknowledge these two, for if not for sheer inches Jak and Mandolin may not have lived. The van barreled through the crowd by direct order of a superior, I’m guessing as a reckless means to break up the endless march. Jak jumped out to grab Mandolin from being hit as it came at us. I barely dodged the side-view mirror as it whipped past me. As I turned around, a huddled mass had already formed around Jak’s limp body. He had been hit.

I felt my cheeks flush with anger as I pushed my way through to hold the cameras back. An ambulance came and I rode along. Within a mile down the road we were pulled over. A cop bullied his way onto the ambulance and proceeded to subject Jak to more stress with his presence. When we finally arrived we were immediately separated at the hospital and I was quickly banned from entering again, banished to the street side with a few others who came for support. Hours passed before he was finally released from “fort knox.”. In between I managed to do an interview with local news, make a ton of phone calls, and solidify my suspicion that our affinity group was being investigated and we had been labeled as “wolves”. In the hospital Jak encountered the alphabet gang. Hand-cuffed to the bed, refused food and water, interrogated and intimidated, it was typical FBI practice. In the end the only thing they got out of him was a vow to sue. That lawsuit against the Chicago Police Department is ongoing. 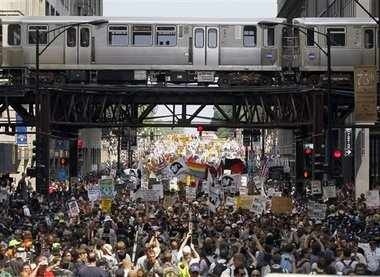 After one of the long days of marching the weather changed. As we stood in the street, some singing, dancing, chanting, a spontaneous peace symbol, made from our bodies gathered in the rain, broke out in the middle of the road, with the backdrop of state police, in neat rows, lining the steps of the buildings. It was the display of yin and yang, a view of our paradigm I will never forget.

On arrival to the church safe-house I spied the piano. The piano had been my peace, my gift to the room of freedom fighters. Sharing a song created an intimacy that is the glue of movements. A simple melody brought out even the quiet voices, breaking insecurities and surrendering to the music. The real spiritual healing happened in that church basement. It is often those small boosts of morale that sustain our bonds the longest. 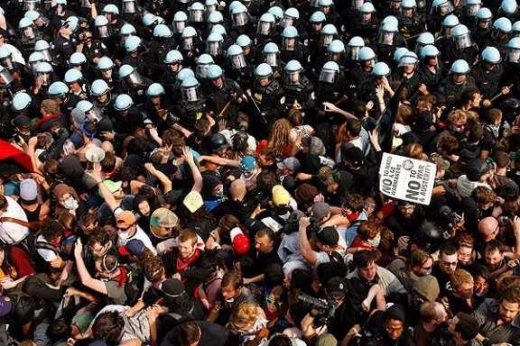 As I woke up among my tribe under majestic willow trees, our camp overlooking the harbor, the melody greeted me: “Why are we in this, situation that just brings us down…” Those words stayed with me as we, only hundreds against thousands, faced down super-sized batons wielded by storm-trooper like forces. We played cat-and-mouse through those foreign streets. The movies had come to life, and at times all I could muster the strength to do was stand back a moment, soak in the crazy scene I had craved, turn to Jak through the black bloc and whisper, “Look where we are…”

I remember all of the planning. Months of planning meetings went into every detail from messaging to the puppets to be carried. Occupy was definitely theatrical in its delivery. Although it was hoped that there would be a massive general strike, the idea of every new yorker denying service has been a dream every anarchist has dreamed. 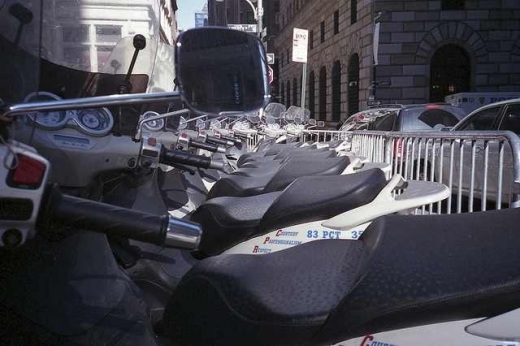 More realistically, organizers pulled off a few pretty eventful moments: The Bryant Park town square, the unveiling of guitarmy, the flooding of union square (for once it lived up to its name), epic marches long into the night( some planned, a few definitely not expected), the sit-in at the Bull and the night wrapped up with a substantial number of standard beatings by the NYPD. It was a day full of scooters and barricades, trying to coral and contain the obvious, the potential of the truth bleeding from our lips to be seep out, uninhibited, to permeate those eager eyes passing by.

Within a year are stored a million moments delicately marked for me in time. I needed only to take a small, conscious step back now and again to remind us, saying, “look where we are…” This had become my life; a wandering gypsy-like existence, resulting from a sudden and traumatic awakening, with the newly discovered conviction that I could never, would never go back to life as I knew it in Babylon. I, along with many others, took a leap of faith, because although the life we were choosing was not easy, the alternative now meant living among the lost, apathetic, distracted masses with the truth, still knocking patiently at the door. (I believe a lot more people will continue to choose a more rebellious path as they grow more tired of the status quo) 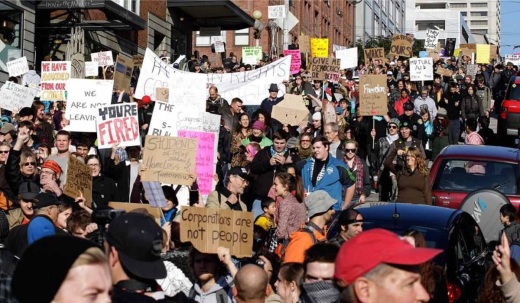 And so, like a band of misfit toys we attempted to take back our lives from a system that was designed to betray us. In knowing what our generation had actually inherited, in waking up from the American Dream, we carried on after the raid of liberty square as refugees, forgotten youth, looked down upon for refusing to just shut up and conform. The only path left was into the inhospitable landscape of our concrete habitat, littered with cops and no trespassing signs.
br />

This is my reflection, as I begin a new chapter in my life and as I continue to recall it, the past year that I believe I finally found my calling. The initial call to occupy brought us all together, and that is what I believe to be the most successful mission of the movement. The network that was born continues to grow and evolve, adopting new names and strength from remaining true to its roots. But regardless of how it will continue to take form, it is the beginning battles, the restless protests, the passionate messages of dissent on cardboard and the relentless will and courage to reclaim space that finally lit the fire to a dormant nation. Out of the chaotic beauty and pain of those early months rose millions of voices over the toxic haze of cities everywhere. It made it beyond towers of industry to farmland, from the cyber world to the prisons. I remember it drifting along the streets as we walked with it, not knowing its reach, and as one voice called back to me on the ashy battlefield of Wall Street, it was the voice I finally recognized as my own.

Letters From The Front Line